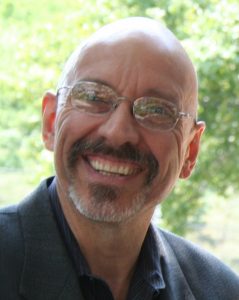 Christopher Fay has been the Executive Director of Homestretch for the last ten years. But, how did he end up here? Join Ashley Alexander as Chris tells her about his extensive past, his current interests, why he loves what he does and much more in the following question and answer:

How did you find yourself in this field?

Well, I always thought I would be in film or theater. I did my undergrad at Carnegie Mellon for theater and then Columbia for graduate school where I studied film. In New York City at the time there seemed to be an epidemic of homelessness. It was everywhere: in the media, on the streets, out of control. Of course, it coincided with the weak economy, the closing down of mental institutions, and the crack/cocaine epidemic.

I wanted to make a documentary about this. Specifically, there were people living underground in an unused Amtrak tunnel. The community that lived there were called “Mole People.” They had found a way to function underground. For this documentary, I had borrowed a lot of money to buy professional equipment. No insurance company would insure this project, since it was such an unknown concept and would take place in a dangerous area. I decided to get a different type of insurance in the form of a personal bodyguard. This is when I met Matthew. Matthew was the scariest person I had ever seen. He was also a Mole Person, ending up there after being put into an institution at a young age where they medicated him so heavily that they taught him to be a drug addict.  I asked Matthew if he would be my bodyguard, and in exchange I’d make him a major character in the film.  He responded by saying, “I know how this will work. You’ll get to know everything about me, you’ll buy me pizza and coffee and you’ll become my best buddy. Then, once you got your film made, you’ll change your cell phone number and I’ll never see you again. You’ll have our movie and I’ll still be here living in a tunnel. Why would I want to do that?”  He was right.  I became silent, as I didn’t know what to say.  We sat in silence for a while, then he took my hand in this incredible grip and he said:

“If you promise me that you will devote your life to helping people like me, in my situation…it doesn’t have to be my, but people like me; then I’ll do your movie”

I said yes.  I didn’t necessarily mean to keep such a promise, but I was desperate to make the film. Throughout the film process, Matthew and I did become close.  I did get to know everything about him.  I even spent a winter night at Bellevue Psychiatric hospital with him, getting him admitted when he had a mental breakdown. I realized that the promise I made to him had to be kept.  So, the rest of my life has been dedicated to helping the homeless.

What were you doing before you came to Homestretch?

Before making the film, I had helped with a church-run soup kitchen. After the film, I went to the church and said, “let’s do something more substantial.  They agreed, if I would manage it, so we turned the soup kitchen into a culinary arts program for the homeless, feeding the hungry while teaching homeless individuals food service skills and finding them jobs.  I did this for 10 years. I then had a chance to make a film based on a screenplay I wrote.  I worried that leaving to make a film might be breaking my promise to Matthew; but Matthew gave me his blessing. He was clean and sober and had a job at this point. I left to make the film and the church found another person to take my place; unfortunately, the financing for this film fell apart, which is common in the movie business, and I had to find another job.  I landed a job with the Milton Eisenhower Foundation where I was in charge of replicating a model program for ex-offenders, called Delancey Street.  Then this job opened at Homestretch, when the founder left, and it was such a marvelous organization, I leapt at the chance to run it. I’ve been here ever since.

Can you explain your role at Homestretch?

I like to equate my role as Executive Director to being a producer in the film industry. A producer takes a story concept, finds someone to turn it into a script, hires the right people to fill all the roles, ensures that everyone can work effectively together, raises the funds and oversees the budget, troubleshoots and problem solves, brings the film in on time and under budget, lets everyone else go home and stays with the editor to make sure the finished product is the best it can be, and then sells it to the public.  Substitute “design of effective services” for script and you got what I do.  While I am not an expert at everything, I am responsible for everything. I try to create an environment in which everyone can do their best work, from the staff on down to the homeless families we serve.

It’s not that we are smarter than anyone else, or have a secret formula; we don’t.  But our model is designed to maximize a person’s likelihood of making strides forward toward self-sufficiency. Families graduate from Homestretch with significantly reduced debt, increased income and higher credit scores, and make headway toward attainment of education and skills. It’s highly individualized to the needs, abilities and aspirations of each family.  We have a depth of services available in one location, and we focus on removing barriers to success. For example, if a mother wants to enroll in school while also working part time, she will need help with child care, food and transportation. We try and remove “I can’t” from their vocabulary.

What is your all-time favorite program that Homestretch offers?

That’s impossible to say.  But maybe it’s our financial literacy program. The average person comes in with high debt and poor credit. We see those clients leave with most of their debts paid off, savings in the bank and restored credit. People often make more financial progress in two years of being in Homestretch than they ever have before, or likely will in the future.  This is truly turning crisis into opportunity.

I’m also proud of the Kidstretch program we offer. It’s a Pre-K program for three to five-year-olds. The Kidstretch Director was a case manager who had a dream of opening this program and she did the work of initiating the program and it’s been inspiring to see it grow.

Are you ready for some rapid-fire fun questions?

What was your dream job as a child?

Movie director. I always loved movies…but you know what? I also wanted to be Santa Claus at one point so there’s that too.

If you could be doing anything in the world right now what would you be doing and where?

Other than what I do right now? I think being a nature photographer somewhere in the African Savannah would be amazing. Filming wildebeests, jaguars, elephants….

How do you spend your free time?

I’ve done a lot of children’s book illustrations. Some have won awards. I also am an avid bicyclist.

What’s something most people might not know about you?

I’m a history buff, I spend hours reading history books. Specifically, I am fascinated by the extraordinary goodness and the extraordinary evil that is inherent to human beings. From people with the highest principles, courage and moral vision like Martin Luther King Jr. to the evil and petty people that created structural evil in Nazi Germany and our own history of slavery.  I am also amazed at human resilience; our capacity to rebuild our lives after catastrophe.   My greatest prayer is that I stand with those who are dedicated to leaving the world a safer, kinder place.